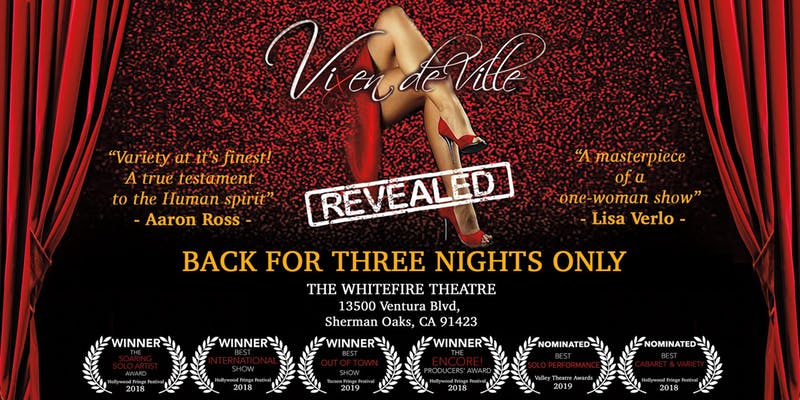 Vixen DeVille is an accomplished, multi-talented, international Variety Burlesque performer, and live event Host, specializing in fire-eating, glass-walking, aerial hoop, and magic. In addition to multiple appearances on TV’s, ‘Masters Of Illusion’, her stage show “Vixen DeVille Revealed” was awarded Winner Best International Show, Winner The Soaring Solo Artist, Winner Encore Producers Award, and Nominated Best of Cabaret & Variety.
Starting her career in London, England with appearances at Cafe De Paris, The Ritz Hotel and three West End runs at The Charing Cross Theatre, she has since relocated to Los Angeles. She performs regularly around town at The Viper Room, LA Convention Center, The Roosevelt Hotel, as well as venturing out to The Orleans Casino and Hotel in Las Vegas. She’s had the honor of performing private events for, ‘The Simpsons’ and Neil Patrick Harris.
From classy to comedic, from glamorous to gory, Vixen DeVille is guaranteed to charismatically perform a theatrically spectacular act perfect for your show or event. With an array of stunning costumes and numerous specialty skills to hand, Vixen can offer you a tried and tested signature piece, or create a custom-designed act specifically for you and your theme.
In addition to performing for audiences, Vixen also teaches her craft both privately 1-on-1 and in supportive group workshop environments. She is a one-stop-shop for anyone interested in the world of Burlesque, with classes ranging from “Introduction to Burlesque & Body Confidence” to full “Solo Act Development” as well supplementary classes covering “